As an introduction though, why not go to the Blog overview first.

Please note that these photos show the layout in my original demonstrator car which I sold a few years ago. I quite liked the layout, but in my next demo car, I shall do better. You'll note that the panels are all my aero deck embossed panels which are a special extra only and have featured only on two cars. You can see a plastic bottle ( a shampoo bottle with top cut off) as a "catch tank", you can do much better than this (note to self!) and Car Builder Solutions (UK) www.carbuilder.com sell one www.carbuilder.com/uk/mini-oil-catch-tank

These are just suggestions, you might come up with better ideas. 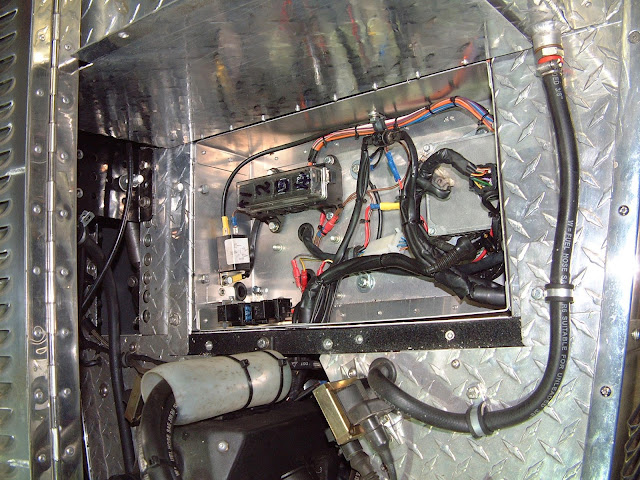 Overall under bonnet shot showing basic layout in the electrics box. Note position of coils etc. You might wish to use stainless steel braided fuel hoses throughout, again www.carbuilder.com/uk/stainless-braided-ethanol-proof-fuel-hose-10mm-38
Car builder sell stainless braided hoses in other sizes too. 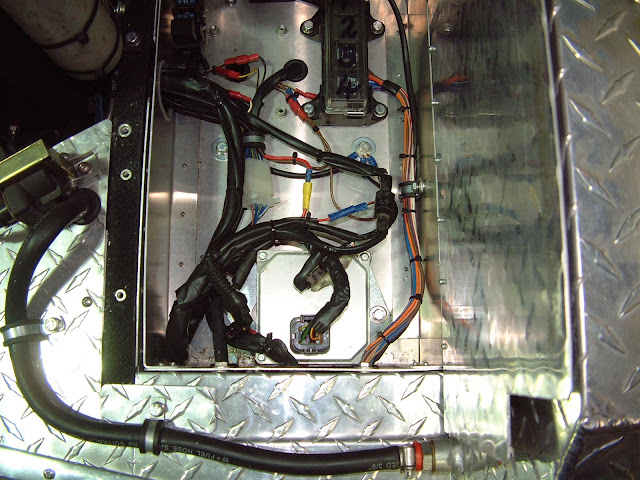 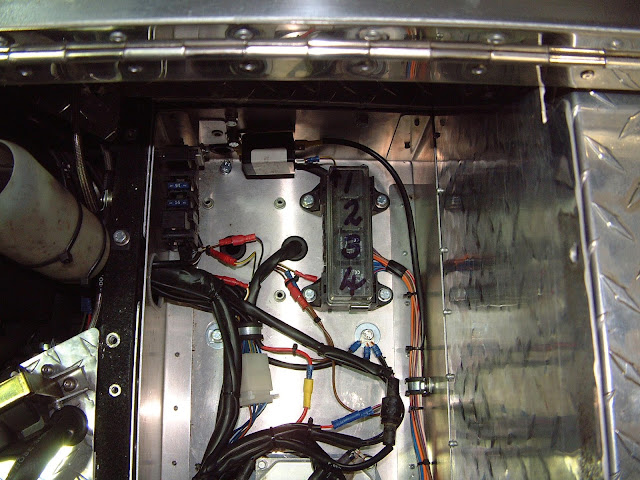 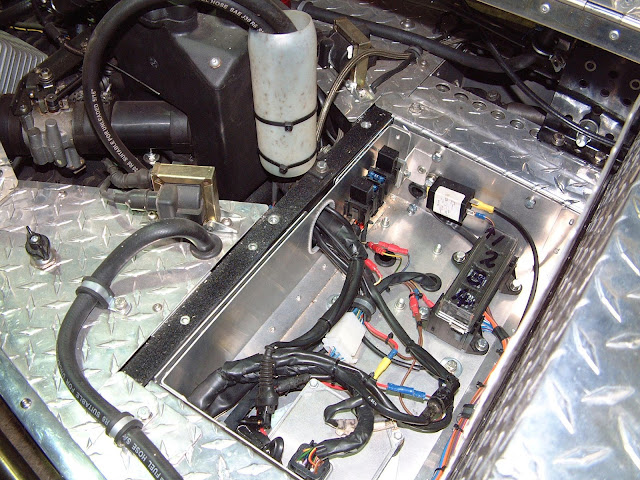 Electrics box 4. Note overall layout, both coils. Note also that I've fitted an easily accessible battery cut out switch (black) fitted to the negative side of the battery. 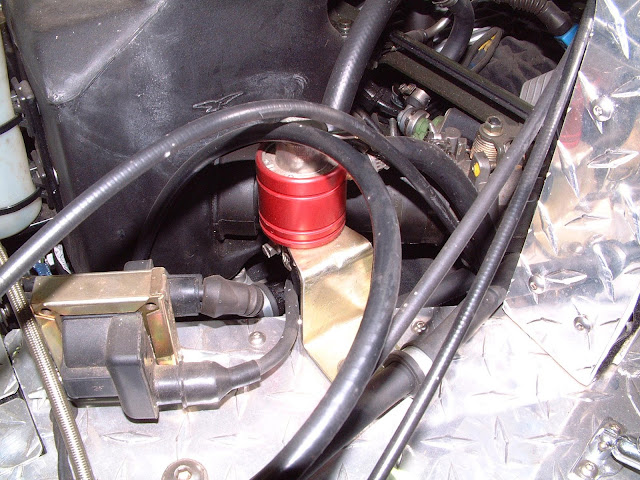 Under bonnet 1. Shows RH coil and after market return filter, sometimes the bike has one fitted close to the tank, depending upon model of the donor. Notice original plastic filter box, which I cut down to fit. 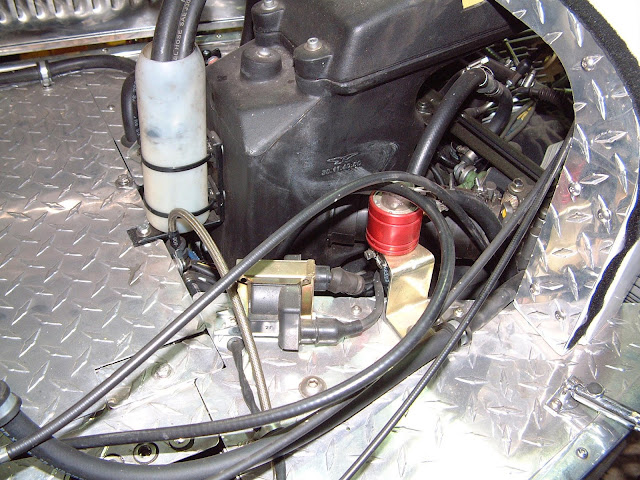 Under bonnet 2. RH side. 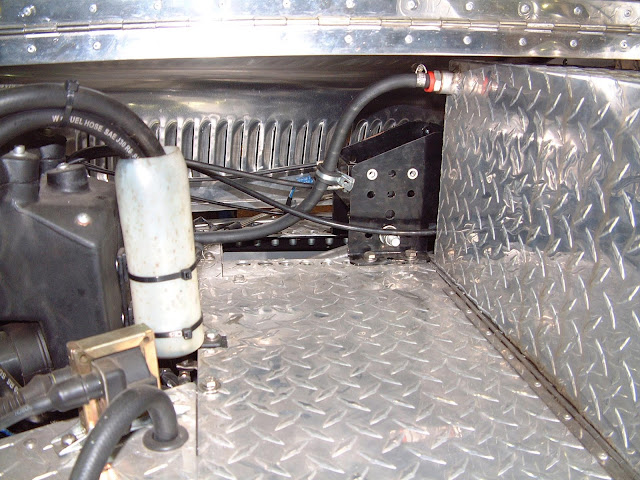 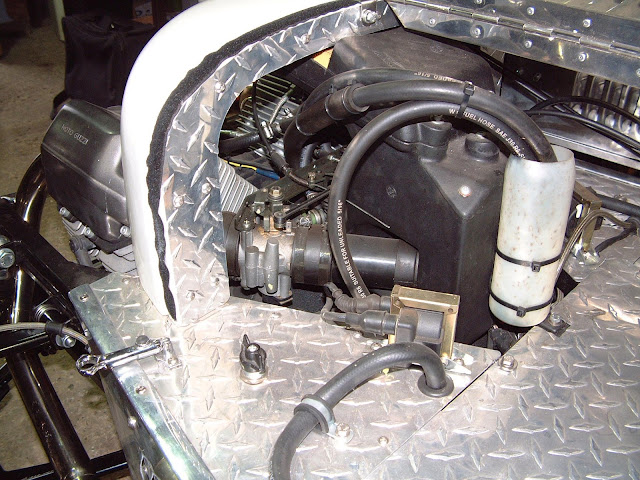 Under bonnet 4. General layout. Note tatty piece of velcro in the bonnet recess of the nose cone (crap!), you're better off using vintage bonnet tape, in fact see underbonnet shots of www.aerobarrelback.blogspot.com 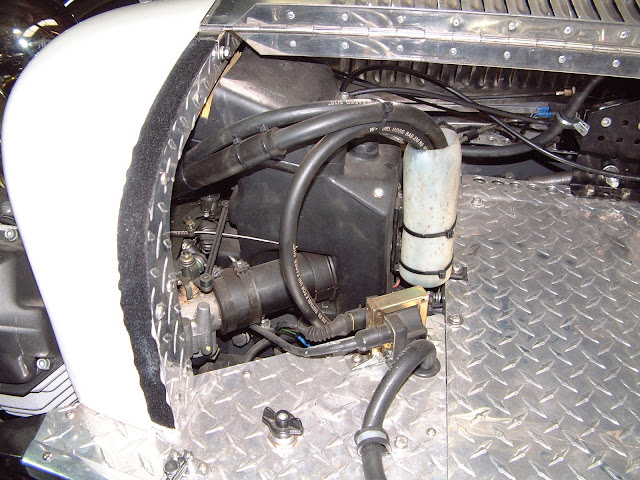 Under bonnet 5. pretty self explanatory. 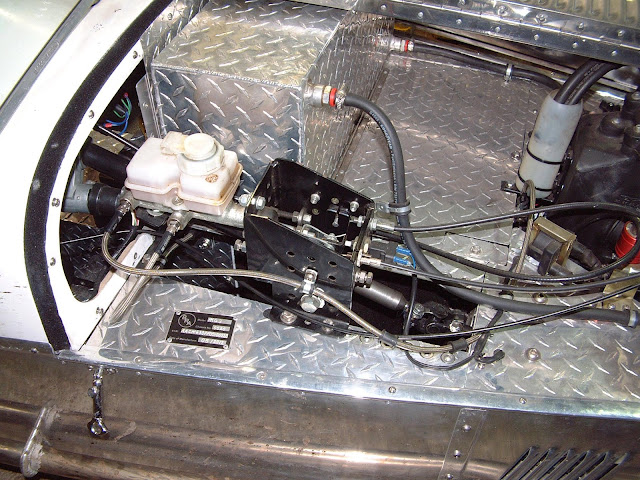 Under bonnet 6. General layout, however, brake lines are the wrong way around. Front to front brakes, and rear to rear brake is correct, not as shown. Pedal box has slightly changed now. When the pedal box is in its rear most position for short arses (like me, 5ft 5 ins), the end of the  master cylinder  will hit the removeable scuttle panel (not shown here) and accordingly, you will need to drill a small hole to accommodate the end of it. 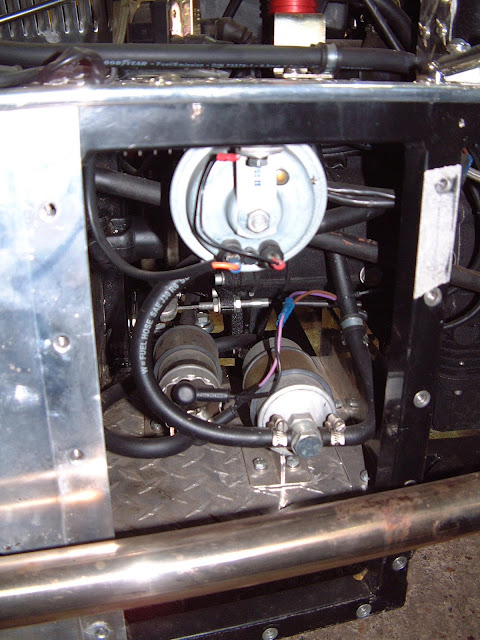 Pump and filter 1. If you remove the front RHS detachable panel, you have a horizontal panel upon which you could mount the pump and filter as shown above. 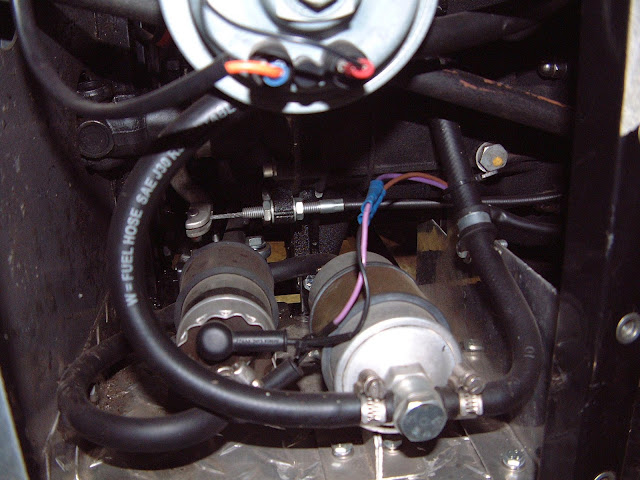 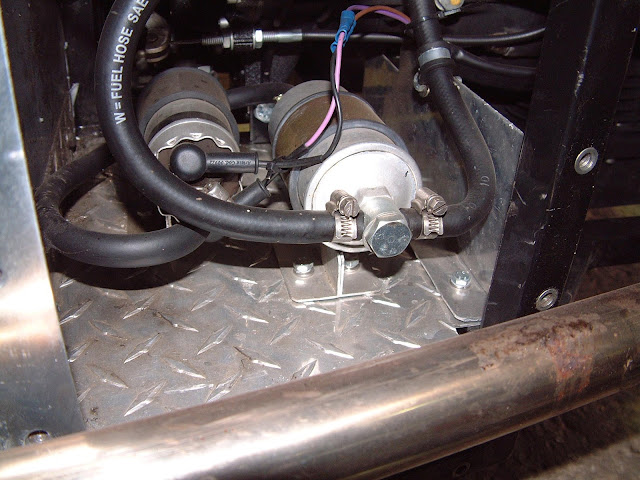 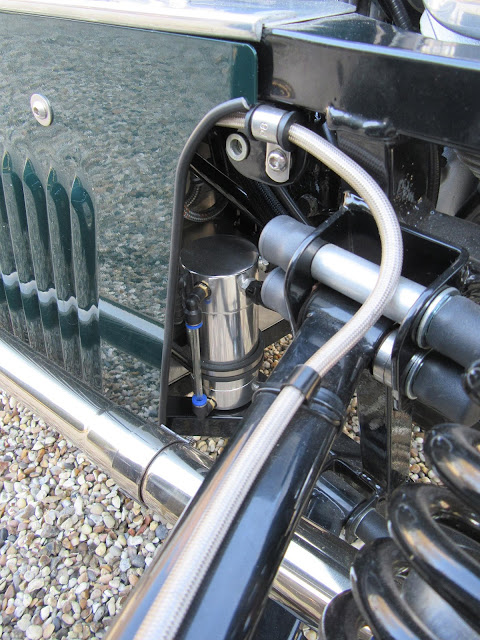 Here you can see the CBS catch tank mounted behind the RHS detachable front louvred panel on a client's car. 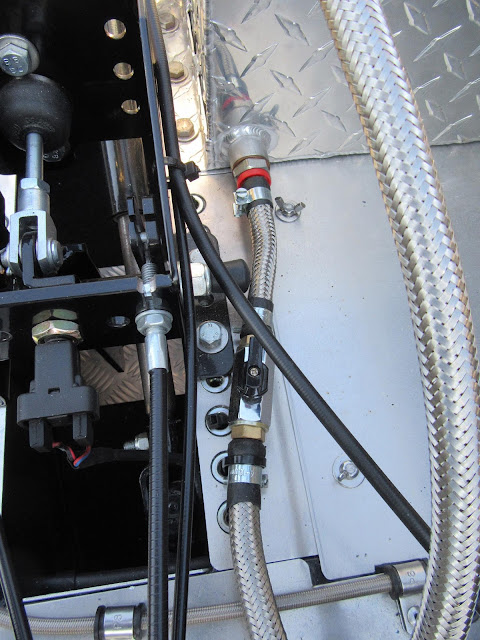 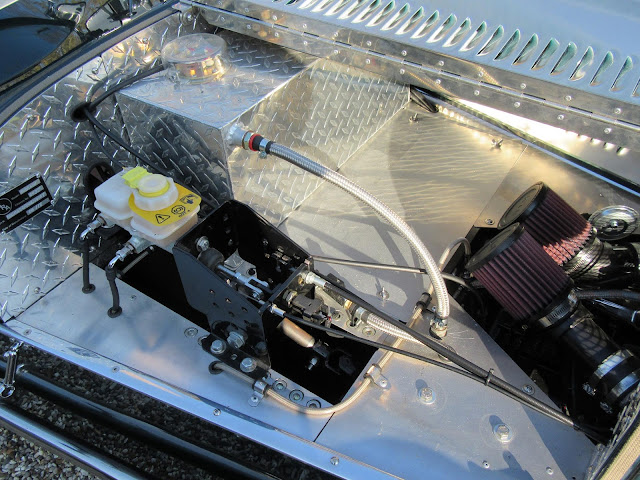 General under bonnet shot of a client's car. 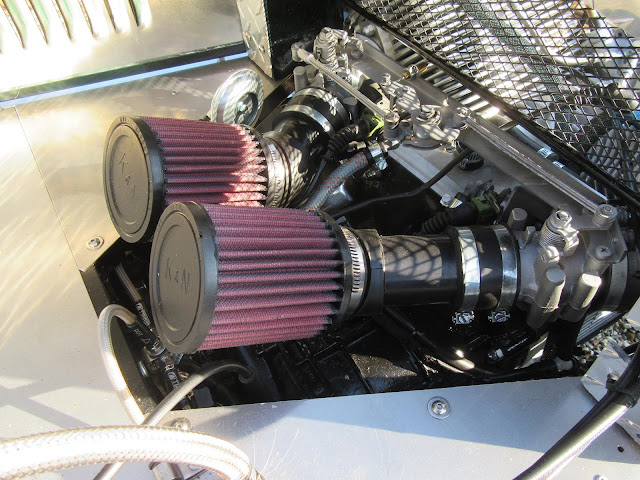 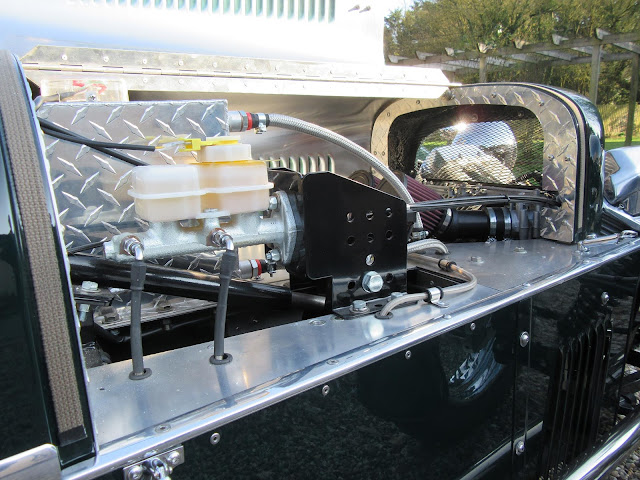 Looking forward under the bonnet of a client's car, note the vintage bonnet tape stuck to the scuttle lip. 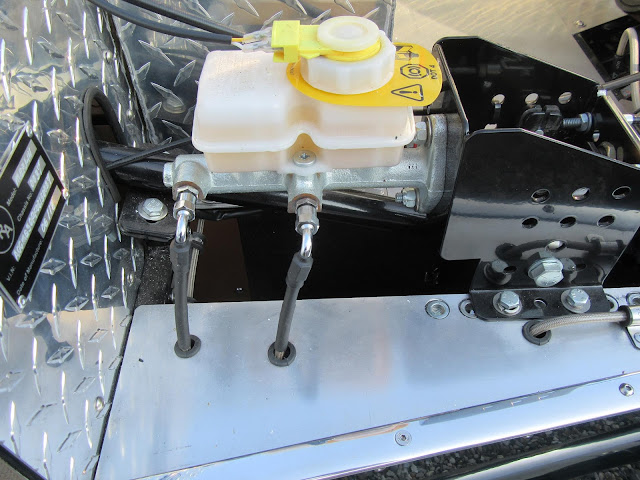 Close up of master cylinder area of a client's car. 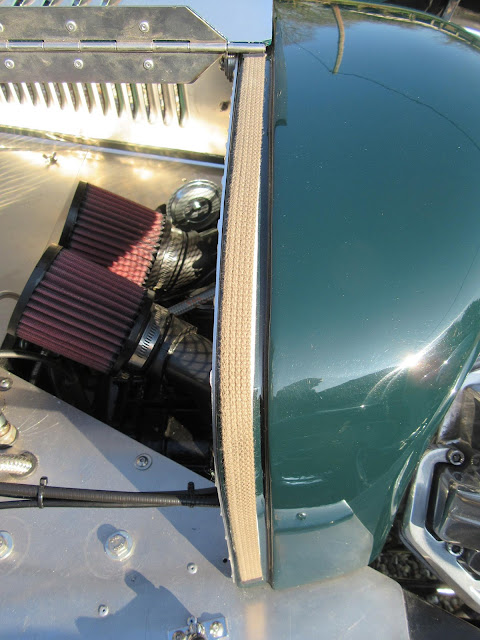 Forward under bonnet area of a client's car. Note vintage bonnet tape stuck to nose cone lip. The client has also retained the polished "knee guard" pieces around the barrels, though he had to modify them slightly.